Line6 Amplifi 30 – AMPLIFi 30 is a modern small amp that delivers award winning AMPLIFi sound which is both compact and affordable. With the stereo speaker configuration you’ll hear every last nuance. Practice and jam with your favorite tracks through the Bluetooth integrated connection. With access to an unlimited selection of free sounds in the cloud you’re future proof. AMPLIFi 30 is also includes a guitar recording interface to help you effortlessly record to your DAW software and replay your track back through the amplifier.

Gone are the days when the small practice amp had the output of a peanut and few if any features. The Line 6 AMPLIFi range is a different beast altogether! 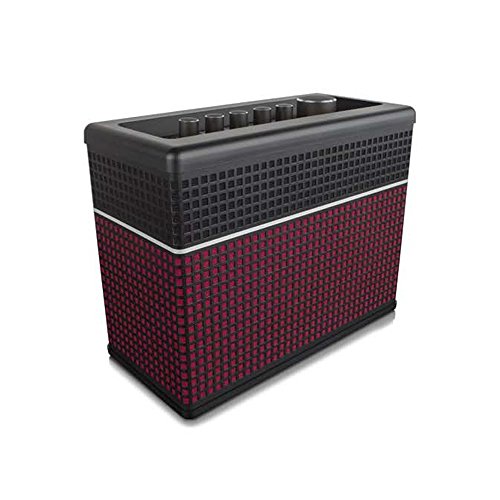 out of stock
LEARN MORE

REVIEW OF THE LINE 6 AMPLIFi 30

To say that the market for modelling practice amps is saturated would be an awful pun, but it’d also be pretty accurate.
Step inside your local music shop, and you’ll be hard pushed not to bump into an amp rammed with approximations of classic gear. It’s no longer a novelty, rather what we’ve come to expect in 2016, so where next?

Well, at a time where we’re seeing manufacturers of every device in your home – from TVs to washing machines – are obsessed with making everything connect to everything else (‘The Internet Of Things’), Line 6 appears to be shouldering the burden of what we’re gonna call The Internet Of Strings with its AMPLIFi range.

Part modelling amp, part recording interface, part Bluetooth speaker, the AMPLIFi has been around for a couple of years, but in a strange backwards release schedule, the self-contained 30-watt practice amp – arguably the most obvious use for all of this tech – has only just surfaced.

The concept is simple: for time-poor players, mo’ features can mean mo’ problems. The goal here is getting it working quickly and doing what you intended: have fun playing the damn guitar. The AMPLIFi does this by rolling multiple functions into one box, taking most of the control away from the amp, and loaning your smartphone or tablet’s touch screen instead.

Instead of horrible button presses and scrolling text on a tiny screen, you wirelessly edit individual controls for your amps and pedals, browse presets, tune your guitar and more from the AMPLIFi Remote app’s clean layout. One of the biggest features, though, is the music playback part of the app.

It’s like a wireless aux input, and will play any music that lives natively in your device’s music library. While you’re there, you can blend the volume of your guitar vs the song you want to jam with, slow the track down and loop sections. This combines with the AMPLIFi’s Tone Matching function, which gives you access to a pool of thousands of cloud-based song tones.

Once your song is selected for playback, it automatically searches the hive mind of the AMPLIFi online community, and suggests suitable presets. Downloading a patch takes seconds, and then you can try it, tweak it, save it and (if you like) re-upload it for others to use.

We were sceptical about the AMPLIFi 30 – it could have just been a rehashed version of 20-year old technology, but it sounds fantastic. The models aren’t just the same classics you find on every amp (although they’re all in there too), and the effects are quality. We were worried that having to be hooked up with our phone would be a pain, but in reality, being free of wires and being able to see everything we were doing makes it far more fun.

There’s barely any need to touch the amp. If Line 6’s objective was to allow players to make more of their guitar time, it’s succeeded. So much so, that we barely had time to file this review!

FIND IT ON EBAY

These ideas converge wonderfully in Line 6's AMPLIFi TT ($150), which builds upon the POD by creating a stylish, low-profile unit that lets guitarists plug into their sound system instead having to lug an amplifier out of the basement every time they...

Well, at a time where we're seeing manufacturers of every device in your home - from TVs to washing machines - are obsessed with making everything connect to everything else ('The Internet Of Things'), Line 6 appears to be shouldering the burden of...

NAMM 2016: Californian digital guitar and audio technology specialist Line 6 has come to NAMM armed with a stack of shiny new goodies. Ranging from the Relay G10 guitar wireless system, touted as the world's easiest, to AMPLIFi 30, the latest addition...

OTHER LINE 6 PRODUCTS WORTH A LOOK