Well it was only a matter of time before the four letter word was used…”jazz”. It’s that time again, here we have a jazz guitar roundup of jazz guitar news from around the world.

There is no end of material for you to look into from all around the world. We hope you enjoy this latest round up.

One of the most common questions I get from jazz guitarists of any experience level is, “How do I bring a more modern sound into my jazz solos?” While there’s no single answer, there are some things we can do in order to inject a bit of modern jazz … Thinking Two Chords at a Time: Tritone Side-Stepping for Guitar – Guitar World Magazine (blog)

Steely Dan blew through thousands of dollars—and as many as eight guitar players—just to nail down one solo. This is the inside story of the hit song “Peg.” Steely Dan’s ‘Aja’ at 40: The Inside Story of the Band’s Most … – Newsweek

Famed jazz guitarist, Phil Upchurch recognized Kevin’s full musical potential and utilized his vocal, keyboard and writing abilities on his record Revelation. The album includes two of Kevin’s original compositions, “When and if I Fall in Love,” and … Kevin Henry Entertains at The Nest in Indian Wells – Palm Springs Life

For Oliver Gannon, there can never really be too much guitar. The Juno Award-winning jazz guitarist remembers playing a minimum of seven gigs a week in the 1970s, when he first moved to Vancouver. Back then, there were several places to play and listen … Renowned jazz guitarists to share stage in Kamloops – Kamloops This Week

Our jazz guitar roundup continues with gig news and how to play features from around the web.

In the Spirit of Django takes place on 23 Sep 2017 at The Queen’s Hall , Edinburgh, 19.30 Tickets here. The music of legendary gypsy jazz guitarist Django Reinhardt will be performed by the Scottish National Jazz Orchestra and guitar virtuoso Martin … Preview – In the Spirit of Django – Scottish National Jazz Orchestra and Martin Taylor – The Edinburgh Reporter 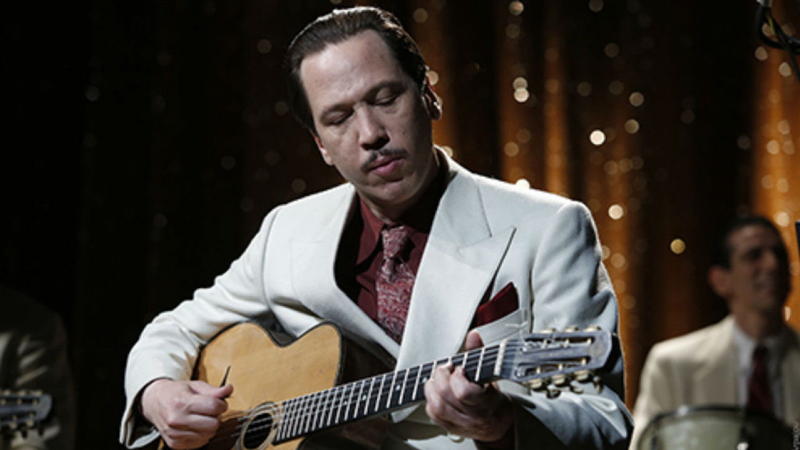 By Robin Lloyd • 4 hours ago Reda Kateb as Django Reinhardt in the 2017 French film “Django” uniFrance Films SIFF presents its mini-festival “French Cinema Now” September 28-October 5th. The opening film on September 28th is “Django.” No, definitely not the one with cowboy hats and six-shooters. This beautifully constructed French film directed by Etienne Comar is about the legendary jazz guitarist Django Reinhardt. The docudrama condenses the events surrounding Reinhardt’s attempts to leave Nazi-occupied France and get his family safely to Switzerland. Reluctant at first to leave Paris, where he is adored by the Germans as well as the French, Django is eventually convinced that the Nazi regime intends to decimate the Roma (Gypsy) population. Jazz Film Review: “Django”

Jazz celebration in Madison to honor Bucky Pizzarelli 15 hrs ago 0 MADISON – Celebrating the rich jazz history of New Jersey, from big bands to bebop and beyond, the New Jersey Jazz Society will mark its 45th anniversary by honoring the 75-year career of the Garden State’s own star jazz guitarist, Bucky Pizzarelli, at 3 p.m. Sunday, Oct. 22, in the Dorothy Young Center for the Arts at Drew University at 36 Madison Ave. in Madison. Featured musicians and guests at the gala will include: Bucky Pizzarell, the guest of honor and guitarist; Rhonda Hamilton of Radio WBGO, who will serve as the mistress of ceremonies; Dorthaan Kirk,WBGO director of Community Relations and Special Events, who will deliver the Welcome Address; Music Director Don Braden, who will perform on saxophone and flute; Martin Pizzarelli on bass; Ed Laub on guitar; Jason Jackson on trombone; Nathan Eklund on trumpet; Bernard Purdie on drums; Dave Stryker on guitar; Tomoko Ohno on piano; vocalists Danny Bacher, Marlene Verplanck and Antoinette Montague; the six-piece William Paterson University jazz study students “big band;” and 15-year-olds Leoneke Scheuble on piano and vocalist Alexis Morrast. Jazz celebration in Madison to honor Bucky Pizzarelli

The Beginner’s Guide to Guitar Modes and Scales

In this lesson you’ll learn what the modes are, how they look on the guitar and how you can use modes in your solos and improvisation. Modes are nothing new, the modes as we use them today were formalized around 1675. Modes are not limited to jazz … The Beginner’s Guide to Guitar Modes and Scales

Tips on Playing Chord Solo to a Jazz Blues

There are plenty of great jazz guitar chord solo players during history but to mention a few there are Joe Pass, Wes Montgomery and George Benson. Listen to how they play their solos to get a feel on how to built up this great way of playing jazz guitar. Tips on Playing Chord Solo to a Jazz Blues

Jean Guyomarc’h (guitar) – Richard Jones (guitar) – Heulwen Thomas (violon) – with Ken Everitt (drums). Local musicians are invited to join in for an acoustic ‘gypsy jazz’ jam in the first set (6.30-7.30). Just £4 to participate and for the … Café Jazz, Cardiff, programme for October 2017.

Nottingham Jazz Diary for September 22 to 29 by Jeanie Barton

Free your mind and feel zen with the assistance of hip, lyrical, free jazz ensemble Eshek who play at Jamcafé in Heathcote Street this Friday, September 22 from 9pm; Joe Egan on guitar, Hugh Pascall on trumpet and Simon Paterson on double bass. Nottingham Jazz Diary for September 22 to 29 by Jeanie Barton

AXTON – Jazz is coming to Pop’s Farm in two ways: modern, and gypsy swing. French guitarist Stephene Wrembel, renowned around the world for his unique guitar style, will headline the early evening show Saturday at Pop’s Farm, coming on stage around 7 … A Gypsy Jazzman: Wrembel set to play Saturday at Pop’s Farm

That’s It For Our September Jazz Guitar Roundup

We hope you enjoyed our jazz guitar roundup. Check out all our new blog posts at the GMI – Guitar & Music Institute home page.

OTHER COURSES TO LEARN FROM IN GMI

ABOUT US
Contact us: guitarandmusicinstitute@gmail.com
FOLLOW US
© Copyright Guitar & Music Online Learning Ltd 2013 - 2019
DON’T MISS OUT!
Subscribe To Newsletter
Get the latest updates and exclusive content & money of deals for our guitar products straight to your email inbox.
Give it a try, you can unsubscribe anytime.