Learn How to Play ‘Minor Swing’ in anticipation of the new biopic film of Django Reinhardt’s life!! This week has seen the announcement of a new film focusing about the life of guitar legend Django Reinhardt. At GMI we thought this would be an excellent opportunity to take an in depth look at how to play ‘Minor Swing’, a classic Django tune.

Django Reinhardt is often considered to have been a major figure in elevating the guitar to its prominent position in modern music today. Largely responsible for the emergence of gypsy jazz in Paris in the 1930s, he helped to realise the guitar’s potential as a lead instrument, where formerly it had been used primarily for rhythmic accompaniment in 20th century music. After suffering injury to his fingers from a fire during his youth, Django developed his own modified style in order to overcome his disability. Despite being handicapped in this way, he went on to become one of the most important European jazz artists, as well as a world renowned guitarist. Let’s listen to his playing in the following recording of the track we’re going to learn in this lesson:

The autobiographic film focuses on Django’s life around the time of the second world war in Nazi occupied Paris. Before we get into the lesson, let’s take a look at the trailer for the film and see what the world’s press has been saying about it…

Here’s what the press have been saying about the new release:

The film focuses on the guitarist in 1943, during the Nazi occupation of Paris. It was directed and written by Étienne Comar and adapted from Folles de Django by Alexis Salatko. All the music in the film is performed by the Rosenberg Trio. The film … ‘Django’: New Django Reinhardt Film Opens January in New York and Los Angeles

The new biopic about jazz legend Django Reinhardt features Reda Kateb, of “Zero Dark Thirty,” in the title role. The French film is set in 1943 when the jazz guitarist was the toast of Paris, but was forced to plan an escape because the Nazis branded … Hearst movie club sees French jazz biopic in Stamford

Miami Jewish Film Festival to screen films from around the world

The film festival will feature World … The festival includes screenings of other music- themed films, including the Florida premiere of “Django,” a period drama about Jazz legend Django Reinhardt. The screening will feature the local Jazz band The … Miami Jewish Film Festival to screen films from around the world

A film about the legendary guitarist: Django 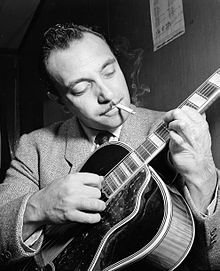 The festival will also be showing films like Django, a period drama focused on jazz legend Django Reinhardt, and Good Deeds: The Conductor Zubin Mehta, which celebrates the Israeli Philharmonic Orchestra conductor’s life and work. Both events will be … Miami Jewish Film Festival Announces 2018 Line-Up

Here’s what Twitter has to say about the upcoming film, then scroll below to learn how to play ‘Minor Swing’:

'Django'—a new film on the life of Django Reinhardt—will open next month in New York and Los Angeles https://t.co/TZQuMMymta

Well we’re certainly excited to watch the new film and gain greater insight into the secrets behind Django’s playing. Now its time to get on with learning ‘Minor Swing’. The following lesson is an excellent step by step tutorial on how to play the song. Practise slowly at first, paying attention to the nuances that are so crucial to emulating the Gypsy jazz style.

To help you recreate Django’s guitar playing style with even greater authenticity, check out this video on his soloing techniques. Topics such as rhythm and chord selection are covered, which will give you a greater depth of technique in learning how to play ‘Minor Swing’.

Expand your mastery of Gypsy jazz further with this video on some of the common scales found within the style. Try to use some of them to help inform your own improvisation when playing in the style of Django.

That brings our tutorial on how to play ‘Minor Swing’ to an end. We hope that after spending time on the materials provided above, you will be able to capture some of the magic of Django’s music in your own playing. A highly accomplished artist, Django Reinhardt refused to let injury or the difficulties of the times he lived in stop him from becoming a great guitarist. What an inspiration!

The film is to be released in New York this January. It certainly promises to be entertaining given the dramatic circumstances of Django’s life, and is sure to involve some brilliant guitar playing!