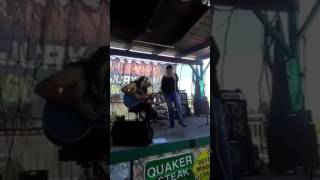 Radiohead are without one of the biggest bands in the world. Their song “Creep” was a massive worldwide hit, but the band have been hitting the headlines for a lot of other reasons lately. Here is the story that has been causing a flurry of media activity.

Regardless of the rights and wrongs of what is happening, it shows how huge the band are and how important people see each performance. Here is the story as reported just a few days ago from this article.

Radiohead have reportedly signed on to give a performance this summer in Israel. The show will come at Park Hayarkon in Tel Aviv on July 19 and may have some political spin, as many bands have boycotted playing in Israel due to the conflict between Israelis and Palestinians. One activist group called Artist For Palestine UK has already called on fans to boycott the show: “Tel Aviv’s hipster vibe is a bubble on the surface of a very deep security state that drove out half the indigenous Palestinian population in 1948 and has no intention of letting their descendants back in,” they wrote. “If you go to Tel Aviv, your presence will be used by the Israeli authorities to reassure their citizens that all’s right with the world and nobody really cares that the Palestinians are suffering… Please don’t go.”

So That’s The Politics – Now For The Song

This is a really excellent lesson which features as you can see split screen learning. If you are looking to learn the song, this video will do it.

Here Is The Song On iTunes

and what about Twitter? Do people still love it as much as ever…

How Well Do You Know The Lyrics To Radiohead’s ‘Creep’? https://t.co/yKug6cmX3B pic.twitter.com/he3Jgd2IYY

You're so very special
I wish I was special